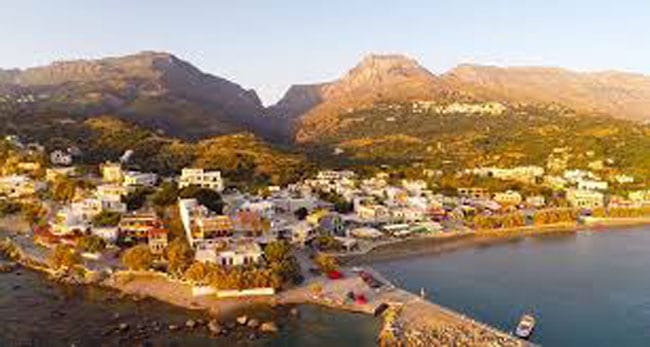 Plakias, located about 36 km south of Rethymnon, is a beautiful seaside tourist resort. In the late 20th century, it was still a small fishing village, but in recent decades it has grown a lot and offers visitors everything they really need.

It is worth mentioning that in the 60’s the beaches of Gialia (name of the coastal front of the area), was a favorite destination of hippies.

Near Plakias, are the mountain villages of Myrtios, Sellia and Asomatos, which retain their traditional form and have unrestricted views of the South Cretan Sea. The whole hill of the area is scattered with slabs, which were discovered during various works.

In fact, due to the large number of slabs (plakes), the area was named Plakias. This contrasts with the usual interpretation that wants the name Plakias to be due to the fact that the village is built on a huge plaque. Similar cities of dead have been found in other nearby areas.

Plakias is definitely one of those places where escape becomes relaxation, as in the surrounding area there are many places to explore and enjoy the nature of the Cretan land.

Some of the favorite attractions of Plakias are: Τhe old windmill, which is located 1.5km away from the village, the large caves (in the area of Paligremnos, the eastern edge of the long beach), that have been dug by the Germans during the Occupation, the Church of Zoodohos Pigi, which is built on the ruins of an older one, etc.

Agios Thomas waterfalls near to Iraklion

23/10/2021
In the prefecture of Heraklion and about 31 km from the city on the way to Metaxochori is the monastery of Epanosifis dedicated to...

All the Cretan nature in the Botanical park in the village...