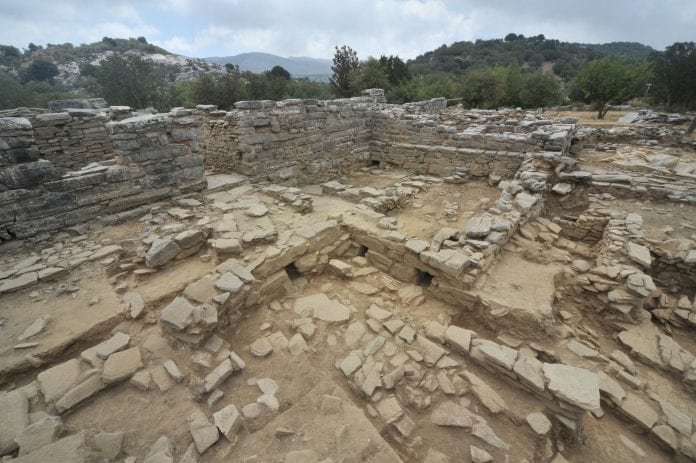 Ancient Zominthos, is located 7km west of Anogia, on the mount of Psiloritis, at a height of 187m. The peculiarity of Zominthos is that it is the only excavated mountainous Minoan settlement so far.

There, for the first time, he heard the name “Zomιnthos” from a shepherd, explaining where his animals were grazing.

During the same summer, he visited the area, where with his experience perceived that Zominthos is an area that has not been touched by humans for the past 1500 years and hides important information about the Minoan past. The first excavations in Zomynthos were carried out between 1983 and 1990 by Yiannis and his partner, Efi Sakellarakis.

In 2004 the excavation began again, led by Yiannis Sakellarakis, and continues uninterruptedly until today,.

In Zominthos there is a palatial building complex (about 1600 BC), with intense architectural elements of the time and huge size. The main building had many rooms and at least 2 to 3 floors that were demolished by the earthquake (around 1400 BC). Thus, today we can see only the ground floor.

In the northwestern part of the main building, a pottery workshop and more than 150 earthenware items were found.

The careful construction of the buildings in Zominthos, as well as the important findings from the excavation (traces of frescoes, delicately painted vessels of precious materials, jewelry and numerous of other finds) denote a Minoan state of high aesthetics, built at a strategic point, to have control of the area, highly organized and perfectly adapted to the adverse conditions of the Cretan mountains.

Should also be mentioned, the the high altitude (about 1100 meters) with the snow and cold winters shows, that the Minoans in Zominthos had the technology to survive in conditions far worse than those on the coast of Crete.

St. Mark’s Basilica: An ornament building in the heart of Heraklion

Aspes – The secret beach of the Cretan south

Avgeniki – The visit with important experiences

The Byzantine church of Rotonda near the village of Episkopi

Oreino Gorge or Gorge of the Red Butterflies