Αρχική For Our Friends Abroad The Church of St. Mary Almyri in Heraklion 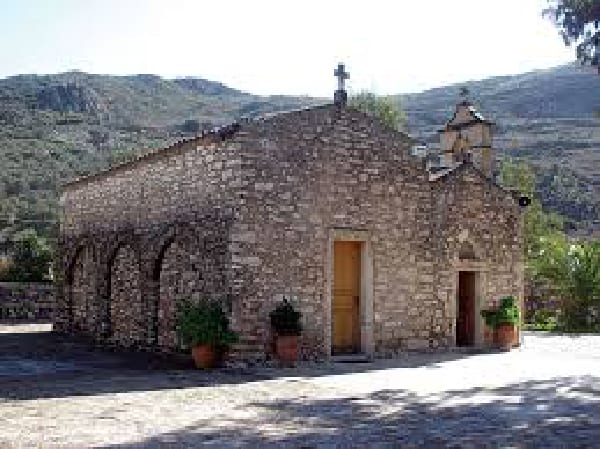 The church of St. Mary of Almyri is located in Heraklion prefecture near the village of Megali Vrisi, approximately 30 km from Heraklion and is built at an altitude of 620 meters . The temple was built in the early Christian times, when upon coming to Crete the Apostle Paul was shipwrecked on the southern coast of Crete and began to teach Christianity. Then, he had as residence and teaching center the church area.

His residence and presence however, provoked the wrath of the lord of Phaistos , who sent his son and because he wanted to get rid of the Apostle, he offered a term to hit his stick on a rock and bring forth salty water. So it happened , the apostle Paul struck his stick and salty water came out . Then the son of the ruler was shocked by the incident as well as the neighbors and he lived the rest of his life in a cave as a hermit in today’s church of Agia Paraskevi. Around the salty spring, the lord built a church . At the spring there is now a well, where during Ascension Day in which that sacred monastery celebrates, holy water appears.

The church in its original form had three aisles and currently has two : one dedicated to the Assumption and the other to the Nativity of the Virgin . Inside there are frescoes from the 9th to the 11th century .

But the St.Mary Almyri is also associated with those women who want to give birth to a child. There are several stories of pregnant women visiting the church to thank the Virgin Mary for the happiness of motherhood.

The village of Tsoutsouras gazing the endless South Cretan sea

Soumada: The Cretan drink of joy

The village of Tsoutsouras gazing the endless South Cretan sea

13/04/2021
Tsoutsouras is located 63km south of Heraklion, at the exit of the imposing Gorge of Mindris. It is built on the site of the...

Kissamos: One of the most beautiful towns of Crete

Avgeniki – The visit with important experiences

The settlement of Agia Galini – Feel the serenity