Αρχική For Our Friends Abroad Crete: The “blessing of the sheep” in Asi Gonia 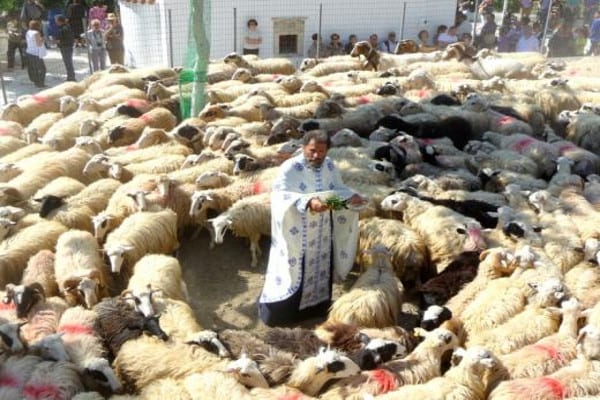 Every year in April, the graziers of the Asi Gonia village, in the Municipality of Apokoronas, devoted to their traditional “rendezvous” with Saint George, observe a custom of years.

It is a custom of the “blessing of the sheep”, in the small church of St. George of Galatas, located in the central square of the village. The custom took place both during the Turkish and during the Venetian occupation.

As most villagers are involved in livestock farming, they follow a tradition in which, they guide their flocks from the mountains to receive the blessing of the Saint, who is considered their patron.

The spectacle is impressive, as thousands of sheep pass through the small lanes of the village to reach the church courtyard.

There the priest blesses them while then the herdsmen milk the sheep and goats, distributing the milk to the believers, who visit the village on the day of the feast of St. George from every corner of Crete.

When the ceremony is over, the flocks return to their stockyards and a Cretan feast is set up in the village. Guests are offered tsikoudia and Cretan rusks.

It is estimated, that each year about 30.000 sheep pass through the church yard while the milk exceeding and offered to those present, is more than 1.000 litres.

Thus, the inhabitants of the village, fulfill their oblation to the Saint, considering that this custom which they follow faithfully, symbolizes solidarity among the people.

24/09/2020
The Cretan tradition is diverse and appears in many areas of everyday life. The Cretan dialect is considered the longest surviving in Greece and...

Cretan woven throughout the centuries

The “Mountain Desert” of Crete