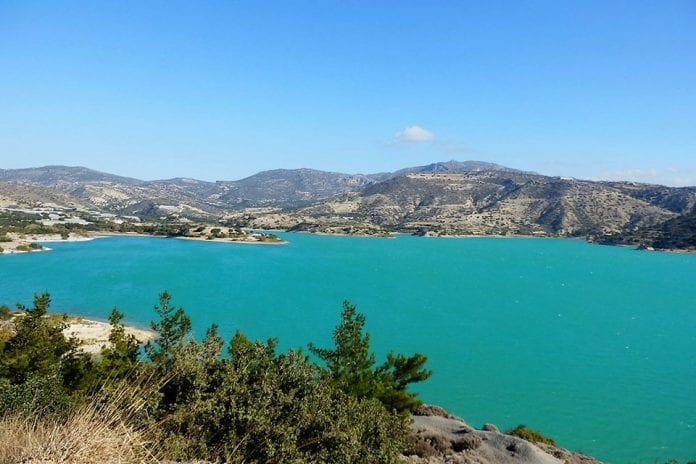 The lake of Bramiana, which was built in 1986 near village Bramiana, is an artificial one and was created to irrigate the crops in the plain of Ierapetra. It is located 5km northwest of the town. The lake covers an area of 1050 acres and has a capacity of 15 million m3.The best period to visit is in early spring, when water level is at its peak.

The water is supplied mainly from sources in Kefalovrysi by Kalamafka, Krygios River that comes from Selakano Wood, from the springs of Malavra and from the springs of Korakas Gorge near Meseleri. This artificial lake, is an important wetland and a resting point for migratory birds. Today, it attracts the largest populations of waterfowl in Crete. According to the Natural History Museum of Crete, over 218 different bird species have been recorded in the region (till 2010).

Mallard ducks that had disappeared from the island since 1975, have started nesting in the dam. During spring and autumn, Bramiana dam is overwhelmed by thousands of migratory birds. In winter, the lake is a haven for birds wintering there. Other animals such as frogs, hares, bats, shrew, turtles, water snakes and lizards are met in the area. The vegetation around the lake is characterized by reeds, plane trees, pines, poplars and tamarisks.

The lake is ideal for hiking and cycling as there is a dirt road that follows the entire coastline around it and is ideal for bird watching all months of the year with a peak season in spring and autumn.

The village of Spili- The natural beauty

The seaside village of Kavros

The beach of Kaliviani with the light-blue sea

The Venetian Shipyards of Heraklion

CretefromHome – The new video that travels you to Crete

Toplou – A history through the centuries